The annual Waikato Waldorf School, Medieval Carnival is a truly unique school fundraiser, and has been part of Hamilton’s event calendar for over 20 years. For one day each year the school is transformed into a medieval village. Castle walls are “built” to surround the school and approximately 2000 visitors come through its fortress-like gates. Live jousting, sword fighting, roman legions, a working forge, horse and cart rides and plenty of interactive fun games and activities for children to get involved with create a truly magical atmosphere. There is also a large banquet table and a variety of food stalls where punters can get a range of healthy food to sustain them through all these activities. 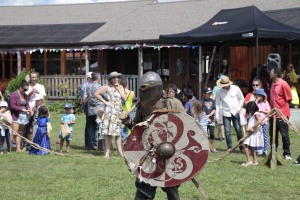 At the end of the Carnival in 2017, the Parent Association reflected that the carnival had grown in size considerably over recent years.  “We did not feel that single use items such as plates, cutlery and cups going into the landfill was an option.  We needed to make a start in planning for a carnival that is now larger but with a footprint that is as small as possible” said parent, Claire Murdoch.

In 2018, creating a Zero Waste event became a goal when the Parent Association at Waikato Waldorf School started planning this year’s Medieval Carnival.  They knew it was ambitious, but as an Enviroschool working to deepen its commitment to sustainability (and working towards Green Gold), they took up the challenge.

Parent, Claire, took the lead role in planning and organising the waste management for the event. Exploring options and planning started several months out, and about 6 weeks before the event Claire began working in earnest with Charlotte, the Enviroschools Lead Teacher and Adrienne, the Enviroschools facilitator. The aims they developed were to:

After the initial scoping and planning meetings between Charlotte, Claire and Adrienne, Charlotte talked to the staff about the concept of a Zero Waste Carnival and how it might be achieved. It was decided that Class 8 students would take on the responsibility of monitoring the waste throughout the day. Parents of this class offered help in supervising the waste stations, ensuring that people knew what waste went into which bin. 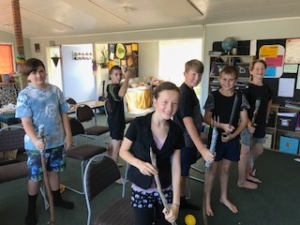 Students identified the following roles for themselves on the day:

Claire investigated the sorts of waste that might be produced from the food stalls at the event and then sought to find alternative compostable or recyclable options that could be used. Food stall owners were informed of the intention to go Zero Waste and given information about the sorts of reusable, compostable or biodegradable plates, cutlery and drink containers they could purchase.

The Zero Waste vision for the event was promoted in the advertising for the carnival, encouraging visitors to bring their own bags, reusable cups, plates and cutlery.  The whole school was involved in the carnival, and students helped prepare the waste stations and made signs to help sorting. On the day of the carnival, a special station was set up for crockery and cutlery (purchased from a local opportunity shop) that could be borrowed and washed after use. There were students and adults who helped with collecting crockery and returning these, cleaned, to each stand. The team insured that each site had two students on the waste collection points and two students collecting waste around the rest of the school. Adults supervised on the waste collection points alongside the students.

A waste audit was organised and undertaken at the end of the day to measure the quantity of waste diverted from landfill. It would also provide base-line data for future events. Large compostable bags were used to line each bin, and once full it was taken to the waste audit area. The total amount of waste collected was 73.5kg (including all compostables, recyclables and waste to landfill). The total of all compostables and recyclables was 62.4 kg, which meant only 11.1 kg or 15% went to landfill. All of the compostables where able to be composted on site in the school’s hot compost pile. Biodegradable cups were sent to “We Compost” in Auckland.

The students and adults analysed the results and shared these with the rest of the school. The audit provided some powerful evidence of their efforts. It also highlighted aspects that could be worked on for next year, like encouraging more people to bring re-usable coffee cups and reducing the amount of compostable plates and paper.

Claire and her team where really pleased with the results and the willingness of food stall owners to support the vision.  The value of having people supervising sorting stations cannot be over-emphasised. Sorting waste at an event, is still not the norm and most people don’t realise how important it is not to contaminate the waste stream with the wrong item in the wrong bin.  Many people were just not used to it and even clearly labelled bins weren’t enough to prevent the wrong item going into the bin. Having people at the sorting stations provided the additional benefit of conversations about waste, what to do with it and a growing awareness about reducing waste.

Students were well mannered and took on the responsibility of aiding waste management very well. They upheld the mana of the school and the community got wonderful feedback from visitors wanting to implement something like this in their events.

Having made a start, the Parent Association now has experience and feedback from others to help plan future events. This first effort of creating a Zero Waste Carnival achieved a significant reduction in waste to land-fill and raising of awareness within the organising group and wider school. By implementing some simple strategies (in particular sorting waste on site and ensuring the use of reusable, compostable or biodegradable containers) the school community was able to make a difference and model positive behaviour. The data from the waste audit is invaluable as it can help the school measure change in their event waste management practices over time.

Next year, the team will allow more time to educate students and the community about Zero Waste options and waste sorting systems. This could include having the enviro-group place notices around the school and in the newsletter with tips and facts about waste minimisation. This would help empower everyone to work together in make good decisions about what comes onto site and happens on the day, including using the correct bins. The Zero Waste event philosophy could expand to set-up times leading up to the Carnival day to include actors and anyone staying at the school. Waste collected on these days would be held separately and provide an insight into this waste aspect of the event organisation. 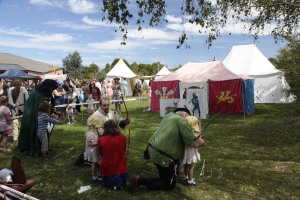 Time to try out archery with some experts on hand!

The Carnival planning group is now aiming to reduce single-use resources in 2019 and increase the uptake of  BYO picnic ware. Having the whole school involved in raising awareness of the ecological and economic benefits of this approach is hoped to help overcome some of the perceived barriers.