A problem become an opportunity at Wairakei Primary School, when students were exploring alternatives for growing food in Taupo’s poor soils and cold climate. Students had come across hydroponics, which lead them on to aquaponics, a way to grow food without fertiliser in a ‘closed loop system’. Aquaponics combines aquaculture, fish farming, and hydroponics, soil-less plant culture. This coincided with decommissioning of the school pool and the journey began. 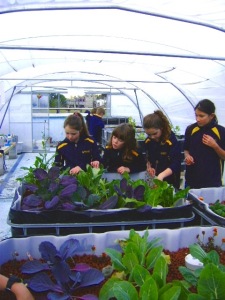 The school saw it as chance to explore alternative food production as well as practical hands on learning of ecological concepts and processes. Planning and fund raising took 3 years and involved students at all levels of the process. The unit was opened in May 2015.

It that short time, the aquaponic gardens have provided many opportunities for students to learn about the complexity of ecosystems. The ‘gardens’ are only able to flourish if each of the four living parts of the system (water, plants, fish and bacteria) are healthy and in balance. Fish provide nutrients for the plants and the plants clean the water for the fish. The unseen heroes are the nitrifying bacteria that convert ammonia to nitrates. Worms also provide an additional service by providing extra nutrients via their excrement and by helping the bacteria to convert the ammonia and solid waste into plant-available food.

Students at Wairakei Primary keep track of the nitrogen cycle through water testing and can clearly see that ammonia attracts the nitrite bacteria that in turn attract the nitrate bacteria which convert the nutrients into a form that is suitable for plants. Everything is connected in this contained ecosystem, and if any element is out of balance, the whole system can collapse. The students are learning this the hard way and have already experienced two such collapses. The first during winter when the bacteria were killed off due to the cold; and the second when the pH in the unit fell below 6 and the goldfish became very sick. Although it was corrected, it was too late for the 60 fish which subsequently died. Without the fish, the plants were no longer able to be supported, the bacteria died off and the whole system collapsed. For the students, they are experiencing first hand, how each part of this interconnected system works together, but also understand that they have a vital role in monitoring and maintaining the system. 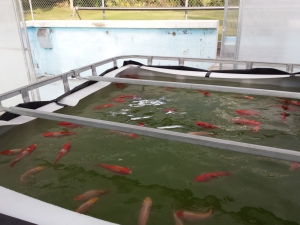 As well as learning about the dynamic relationships of an ecosystem, students are far the students are growing bok choy, beetroot, spinach, silverbeet, rocket, celery, cabbage, brussel sprouts, broccoli, cauliflower, tomatoes, capsicum, and gold fish in their aquaponics unit and attracting much media interest nationally, as well as internationally.